As a visitor of the website http://crowd.track.be you can enter your name and experience how it would sound on the Ghent Belfry. The website visualizes the soundtrack in bells. You can share your soundtrack on social media such as facebook and twitter with a personalized link.

Afterwards you can add your name to the ‘crowd-track’. This is a crowd sourced music-composition consisting of the names of visitors. With these names the city-composer and pop music artist An Pierlé will create a song. She will bring this piece live on the carillon during the final week of the TRACK event. This ‘crowd track’ will be available as an MP3 on the website.

The campaign was even added as a 42nd piece of art to the official selection of artworks for the TRACK art-festival.
Prophets conceptualized the campaign and developed the website in 4 languages. The campaign is aimed at an international audience. Toerisme Vlaanderen activated the campaign through the foreign offices, PR and social media efforts. 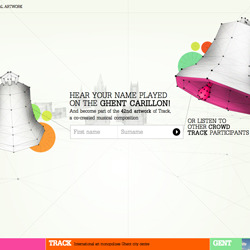